Rod’s Food may be famous, but Momma Onyx is a legend. This beautiful onyx percula clownfish and her mate (Poppa Onyx of course) came to Rod’s Reef from Inland Aquatics in the early 90s as replacements for a big, boisterous Clarkii clown who spent her days relentlessly re-aquascaping a 6-foot reef tank. These captive bred percs that originally came from C-Quest, moved into a sprawling S. gigantea anemone that at the time was considered to be nearly impossible to keep. When they first arrived at the shop, Rod was actually a little miffed considering what he paid for them, because Momma was a mis-bar and Poppa had a deformed face. Many breeders would have culled both of these fish, but they turned out to be one of the most successful and productive pairs of clowns in the hobby. They produced thousands of classic onyx percs that still populate many of our reefs, and not a single fish ever had to be culled. 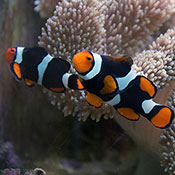 Momma and Poppa Onyx started breeding around 2000, and a well-known breeding facility told Rod that their offspring would never get any black. But on the contrary, this amazing clownfish couple actually produced fry that colored very early in comparison to fry coming from other breeders. Most juveniles would color within a year, and some in less than 6 months. Between this and the characteristic black velvet and vivid orange of Momma and her offspring, Rod’s Onyx became the original designer clownfish. Momma Onyx in particular became famous and is still one of the most recognizable individual clownfish out there. There has never been a word of negative feedback about Momma’s onyx babies and she essentially set the standard for Grade A onyx percs. 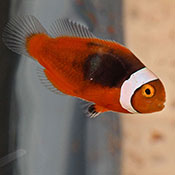 The high demand for Momma’s offspring led to Rod’s acquisition of many other clown species in trade for his onyx. Nine different species of clownfish spawned and had offspring that were successfully reared to adulthood at Rod’s Reef, often within weeks of arrival and being fed top shelf food. What’s the explanation? It’s all in the food!

Over the years, Rod’s Food has consistently seen exponential growth, and Momma and Poppa Onyx kept churning out beautiful babies, but time and space to raise them all was limited. So Rod could focus on the booming food business, Alex Rose came in to take over where Rod left off and became Momma’s manager and caretaker for a few years so that more fantastic onyx clowns could be introduced to the marine aquarium world. One day after living happily with her mate in their anemone for almost 20 years, Momma Onyx disappeared into the reef without a trace never to be found. Super-male Poppa Onyx is now a breeding female still spawning in the reef of prolific clownfish breeder Tom Kucala. 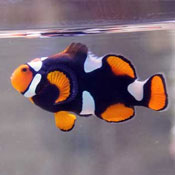 Momma’s memory will forever live on as she is the face of Rod’s Food. That healthy, sassy, unforgettable fish on our logo is Momma Onyx, and we remember her awesomeness with every bag of food we fill. So crack open a pack of the freshest, most nutritious, and tastiest (just ask the reef!) marine cuisine available and feed your reef what it needs. “To Rod’s Food!” 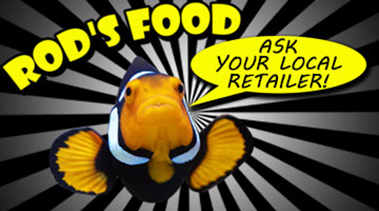